NGO Forum
PDAO has been a member of NGO Forum for more than 5 years ago. PDAO also a member of steering committee of NECA and RCC. NGO Forum on Cambodia works to improve life for poor and vulnerable people in Cambodia. It is a membership organisation that builds NGO cooperation and capacity, supporting NGO networks and other civil society organizations to engage in policy dialogue, debate and advocacy. (http://www.ngoforum.org.kh/index.php/en/about-ngof/introduction)

Working Group for Partnerships in Decentralization (WGPD)
PDAO has been a member of WGPD for more than six years. WGPD was established as an alternative of NGOs working in the field of supporting the implementation of decentralization and administrative reform in Cambodia. It consists of more than 30 NGOs both local and international.

Cambodian Humanitarian Forum (CHF)
PDAO has been a member of CHF since 2013. PDAO has been playing an active role as one of the members of the network. We have a strong commitment of contribute and provide any assistant as possible in case of emergency response. 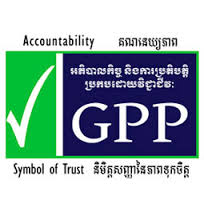 In July 2004, CCC started a project, the NGO Good Practice Project (NGO GPP) that aimed to improve NGO governance and accountability. During 2011the NGO GPP has underwent a rebranding,to de-emphasize ―project‖ and focus more on the core elements of good governance
and professionalism in the NGO sector. The NGO code and NGO Voluntary Certification System are now recognized as tools to be used to promote NGO good practice, and improve partnerships between NGO community, government and target populations in the development of Cambodia.

NAT is a local association in Takeo. It became an independent association in 2010. NAT consists of 36 NGOs members both local and
international that currently operate in Takeo province. It aims is to build stronger partnership among NGOs working in Takeo and to exchange
achievement and experiences, as well as key challenges for mutual support among its members and to have a collective voice for stronger collaboration.